A rapid fire, full-auto assault rifle that can also fire in single-shot mode. It’s highly accurate, with a recoil profile that spreads vertically up and slightly to the right. You get 18 bullets per magazine.

The first assault rifle to use energy ammo - the Havoc has a half-second wind up time before the first bullet. The Havoc is also the first gun to have two possible hop-up attachments. The Turbocharger removes the half-second wind up, making the Havoc far more reliable in head to head duels. The Selectfire Receiver gives the Havoc a special single-shot charge mode which eats up 5 energy ammo per shot, but turns the shot into hitscan with damage fall-off—the only gun in Apex Legends with these attributes.

A fully-automatic rifle that’s more powerful than the R-301 Carbine, but has more recoil. It also has a single-fire mode, and fires 20 bullets per magazine.

An assault rifle that fires a three-round burst by default, with slight vertical recoil during each burst. You can also switch it to a single-shot mode. At 36 damage for a headshot, it’s the highest damage assault rifle in Apex Legends. 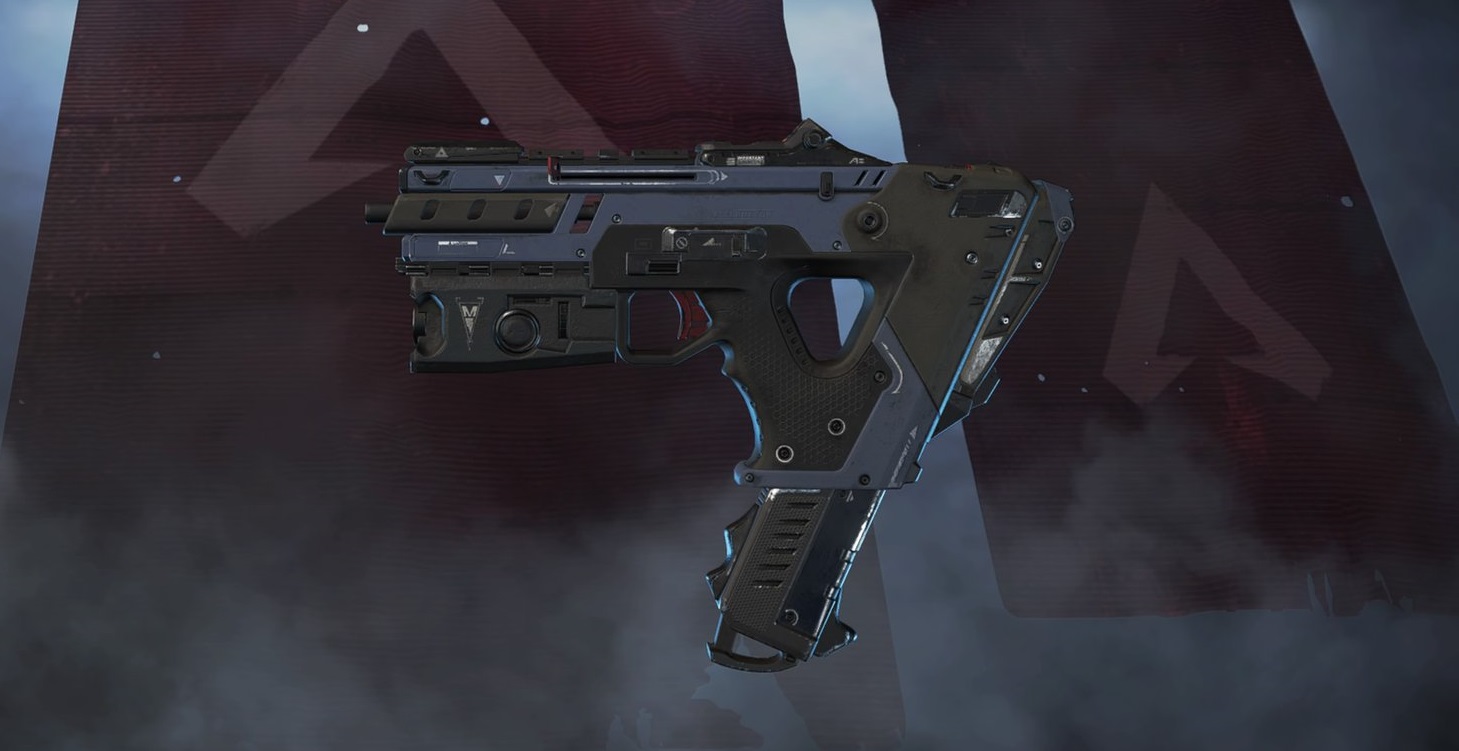 A full-auto twin-barrel SMG with slight vertical recoil. It fires 16 rounds per magazine.

A burst-fire SMG that fires five shots per burst, with 20 bullets in each magazine. You can equip it with a Selectfire Receiver hop-up attachment, which will let you fire in full-auto mode. Looks like a P90.

A rapid-fire, low damage SMG that fires 18 rounds per magazine.

A low-damage, rapid-fire automatic pistol with a recoil pattern that spreads vertically and curves to the right. Each magazine carries 15 light ammo rounds.

A light pistol with 10 rounds per magazine. It has very little recoil when fired rapidly.

This magnum is a single-shot revolver that packs a punch. At 90 damage per headshot it’s by far the most powerful pistol, although it’s slow firing, and you’ll need to wait for the recoil to reset between shots. You can attach the Skullpiercer Rifling hop-up attachment to further boost headshot damage.

An energy ammo LMG with a fire rate that speeds up the more bullets you squeeze off at a time. It has high recoil (up and to the left), but you can equip it with a Turbocharger hop-up attachment to make it more stable. It shoots 44 rounds per magazine.

A fully-auto LMG that fires heavy ammo. It deals more damage than the Devotion, but doesn’t fire as fast. Its recoil spreads vertically, then left, then to the right.

As the only sniper rifle that takes light bullets, the G7 Scout is also the lowest-damage sniper in the game, dealing 60 damage per headshot. Each magazine holds ten rounds, and it has a built-in compass on its back display that tells you which direction you’re facing.

A slow-firing semi-automatic sniper. It spits out fewer bullets per second than the G7 Scout, but does more damage thanks to its heavy ammo. Slap on the Skullpiercer Rifling hop-up attachment for extra brain damage.

One of Apex's more interesting guns, this is an energy sniper that fires three shots in a horizontal line with a small spread—you can reduce the spread further by attaching the Precision Choke, which gives you a tighter grouping when you aim down sights. Its fire rate is comparable to the Longbow DMR’s, but it does far more damage. You can fire five times per magazine.

A drum-mag automatic shotgun with a steady fire rate that fires nine bullets per spread. Its recoil spreads slightly up and to the left.

The slowest of the three, the Peacekeeper is a lever-action shotty that needs to be reset after every trigger pull. It fires 11 pellets in a star-shaped spread, and you can reduce the size of that spread with the Precision Choke hop-up attachment—when it's attached, you'll notice your gun charging when you aim down sights. When you fire, the spread will be tighter than usual.

An important note with the Peacekeeper, similar to the EVA-8—other than using the Precision Choke (or a Digital Threat), there’s no advantage to using ADS, as the Peacekeeper has pretty much the exact same spread when hip-firing.

Already being mocked and memed as the worst gun in the game, the Moz is a triple-barrel shotgun pistol that fires three bullets in a triangular spread. It needs to be reloaded every three shots.

A powerful semi-automatic shotgun that fires eight bullets in a spread. It deals a huge 36 damage per bullet—that’s a maximum of 288 if you land all bullets in a headshot.

A legendary bolt-action sniper rifle that comes equipped with a variable optic scope that you can switch between 6x and 10x zoom. Noteworthy is how slow the Kraber is to operate: it requires bolting between each shot, then a magazine reload after four rounds are expended.

Click to go back to the top of the page!